Originally from Prince Georges County, MD, Brian was an undergraduate at Middlebury College in Middlebury, VT. While at Middlebury he majored in chemistry and got his first taste of independent research in the organic chemistry lab of Prof. Jeff Byers working on the synthesis of indole derivatives via radical aromatic substitution.

After graduating from Middlebury Brian took a year off before entering graduate school. He spent the fall of that year working in the flavor laboratory at Nestlé in New Milford, CT. Once the snow started falling he and a group of friends from Middlebury moved to Salt Lake City to work and ski in the mountains and enjoy the Olympics. In the summer of 2002 Brian moved to California to start graduate school at UCLA.

While at UCLA Brian worked jointly in the research groups of Prof. Ken Houk and Prof. Fraser Stoddart. There he used experimental and theoretical techniques to study a variety of problems in physical organic and organic materials: [1,3] sigmatropic rearrangements, oligoacene-based organic materials, mechanically-interlocked molecules, molecular motors, self-assembly, and dynamic covalent chemistry. He was fortunate to be part of an NSF-sponsored Materials Creation Training Program that allowed him to spend five months at Bell Laboratories/Lucent Technologies (now Alcatel-Lucent) investigating organic semiconductors.

After receiving his PhD. in 2006 Brian moved back to Salt Lake City and began an NIH postdoctoral fellowship in lab of Prof. Peter Stang at the University of Utah. At Utah his research focused on the design and synthesis of metal-organic supramolecules via coordination-driven self-assembly.

Brian began his independent career in the Department of Chemistry at Wesleyan University in the summer of 2009 and was promoted to Associate Professor in 2015. His primary research interests are in organic, physical organic, and materials chemistry.

Outside the lab Brian enjoys skiing and hiking in the mountains, racing triathlons, and spending time with his wife and their four kids. 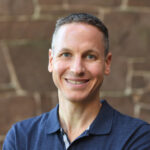